Organisers of the world famous music festival plan to build and sell seven homes on a former car park, located in an area of outstanding natural beauty and close to a World Heritage site.

Plans have been submitted to Denbighshire council to build on land used as an overspill car park for the town’s main International Eisteddfod Pavilion, off Abbey Road.

The site is currently a field adjacent to the pavilion and located close to Pontcysyllte Aqueduct and Canal World Heritage Site.

The design and access statement (DAS) classifies the area, which agents Fisher German say is no longer required by the festival, as a brownfield site and suitable for development.

The scheme would fall outside of the local development boundary but Fisher German claims the area is suffering a shortfall in housing when compared against Denbighshire council’s targets. 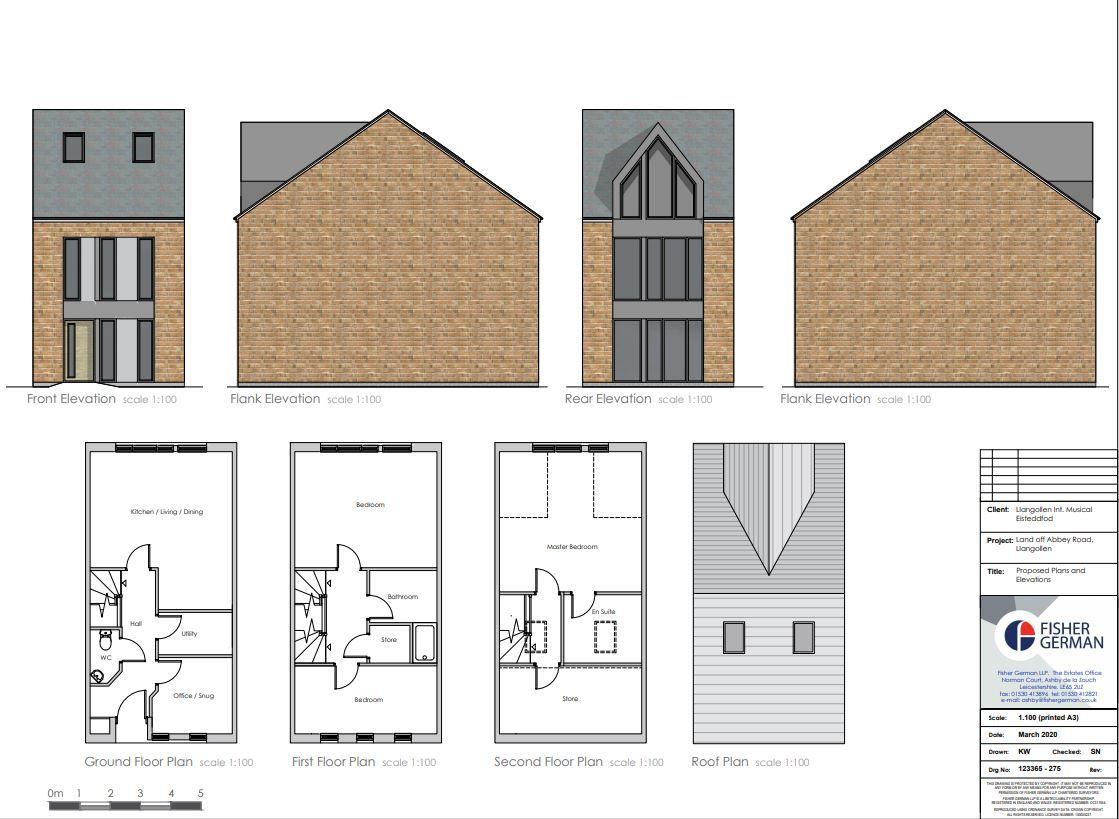 The site also sits within an area of outstanding natural beauty (AONB) but the agent said “the proposed density and nature of development will slot seamlessly into the existing pattern of development along Abbey Road”.

Within the planning documents Fisher German said: “The development has much going for it.

“It is located in a highly accessible location within easy walking distance of the town centre.

“The development therefore represents a beneficial use for a brownfield site that might otherwise remain as vacant and visually harmful to the approach to the town centre.

“In sustainability terms, the development can only be described as scoring highly.”

The agents claim, although no developer has been identified yet, homes could start to be sold within 17 months of planning permission being granted.

The layout and number of bedrooms has not been revealed but planning documents state “the development will provide seven modestly sized family homes, which would be eminently suitable for local people wishing to upsize (young families) or for older people wishing to downsize”.

The first International Eisteddfod was held in in Llangollen 1947 and has become a staple Welsh cultural event with artists from around the globe clamouring to appear.

It celebrated its 70th anniversary three years ago and in that time welcomed the great tenor Luciano Pavarotti twice – once as a member of the Modena choir in 1955 and again as an international star in his own right 40 years later.

Even Placido Domingo’s first ever UK appearance came at the 1968 International Eisteddfod.

Llangollen International Music Festival has been approached for comment.

Students from Coleg Cambria in Wrexham secure places at Oxbridge

Lots of positive feedback following the refurbishment of Brymbo War Memorial. Thank you to @ParryLtd who did the work on behalf of Brymbo Community Council.

Welcome home, @moodymarty65! ❤️ Wrexham fan Martin is back in town for the first time in 44 years after moving from North Wales to Canada as a youngster, and we were delighted to be able to make his visit a special one ahead of tomorrow's match. #WxmAFC