A fighter jet that will help secure hundreds of jobs in the region and pump billions of pounds into the economy made its first appearance in the skies of Wrexham this week.

Many people heard a noisy jet in the Wrexham area on Wednesday afternoon, with several comments on social media asking what the unusual jet was. A handful of photographs have surfaced since, however it seems the NPAS police helicopter had the best view.

The footage of the F-35 Lightning was captured using the helicopters onboard camera.

“Good morning from your day crew. A bit of a wet one for us today with a chance of thunderstorms this afternoon.

One of our TFO’s managed to capture an F35 over our base the other day… I can assure you we’re not trying to get a missile lock on.”

Costing over £93m each the multi-role F35 fighter jet is the first to combine radar evading stealth technology with supersonic speeds and short take-off and vertical landing capability.

The F-35 maintenance programme will generate millions of pounds and support thousands of jobs in North Wales.

Over the lifetime of the programme, components for hundreds of European-based F-35 aircraft will be serviced and maintained in Deeside, the contract is reported to be worth £2bn.

It is projected that around £35 billion will be contributed to the UK economy through the F-35 programme, with around 25,000 British jobs also being supported.

A second F-35 Lightning fighter jet squadron arrived in the UK this week. 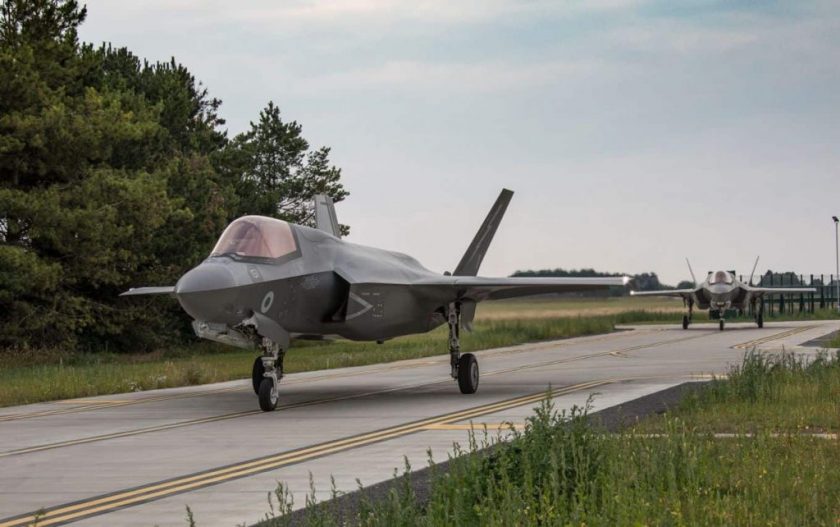 According to a statement released by Royal Air Force, six of the cutting-edge aircraft took the 10-hour flight from MCAS Beaufort in South Carolina.

The formation included the UK’s 18th Lightning fighter jet, demonstrating the UK’s progress towards meeting the projected order of 138 aircraft over the life of the program.

207 Squadron will formally stand up on 1 August 2019 and the first F-35 pilot course at RAF Marham is due to commence in early-September.

617 Dambusters Squadron arrived at their new permanent home last year and completed their first operational mission in the fight against Daesh in June.

(Thanks to Deeside.com for helping with the above!)

What do you want to read next?

Clare Wynne 🏴󠁧󠁢󠁷󠁬󠁳󠁿
@Clare_Wxm
@wrexham This could be such a big game changer for the town, so fingers crossed we get a proper fair share 🤞🏼🤞🏼🤞🏼

Wrexham.com
@wrexham
Big pot of money announced to help towns by Welsh Government, Wrexham Council Leader says "we will be ensuring that Wrexham gets its fair share” - details of projects not yet known link

Wrexham.com
@wrexham
Highs of 6C today - and a dry week ahead. Tomorrow could be the nicest on the forecast, could even be sunny 😎
View all of our recent tweets by clicking here...!