A Welsh Ambulance Service manager has described the moment he thought he was going to die after contracting coronavirus.

Nigel Heal, the Trust’s Quality Improvement Manager based in South Wales developed symptoms in April, days after his partner was admitted to hospital with the virus.

The 62-year-old took a deterioration of his own and became so breathless that he made a late-night call to 999, and was also hospitalised.

Nigel, a former Lieutenant Colonel in the Queen Alexandra’s Royal Army Nursing Corps, recalls: “In the days after Rob was admitted to hospital, I also became unwell with a fever and a dry cough.


“I’m a nurse by profession and knew absolutely what it was.

“I had an oximeter at home which allows me to check my oxygen saturation levels, and they were very low.

“I remember trying to walk up the stairs to go to bed and feeling really short of breath.

“In that moment, I wondered if it was a good idea to go to sleep because I didn’t think I would wake up.”

Home alone, Nigel called 999 and an ambulance took him to Nevill Hall Hospital, where he was admitted onto a Covid-19 ward.

“The sense of relief at being admitted was overwhelming,” he said.

“I was exhausted, struggling to care for myself and my fever wasn’t responding to paracetamol. On admission, I was asked if I wanted to be resuscitated if required; it was a sobering moment.

“At this point, I was also told that the swab taken in the Emergency Department was positive for Covid-19, so it was confirmed.”

Nigel was in the ‘Amber’ zone of the ward reserved for less critical patients, but would later be moved to the ‘Red’ zone.

He said: “I was still struggling to maintain my oxygen saturation levels so a decision was made for me to have a form of ventilation called CPAP, or Continuous Positive Airway Pressure.

“My consultant also suggested I try ‘proning,’ which is the process of turning a patient from their back to their stomach to allow for better expansion of the lungs and because oxygenation is easier in the prone position.

“I followed the guidelines religiously, even setting my iPhone alarm so that I would wake up in the night and turn over.

“I knew from my experience as a nurse that this process is ‘last chance saloon’ stuff, and it reinforced to me how ill I was.” 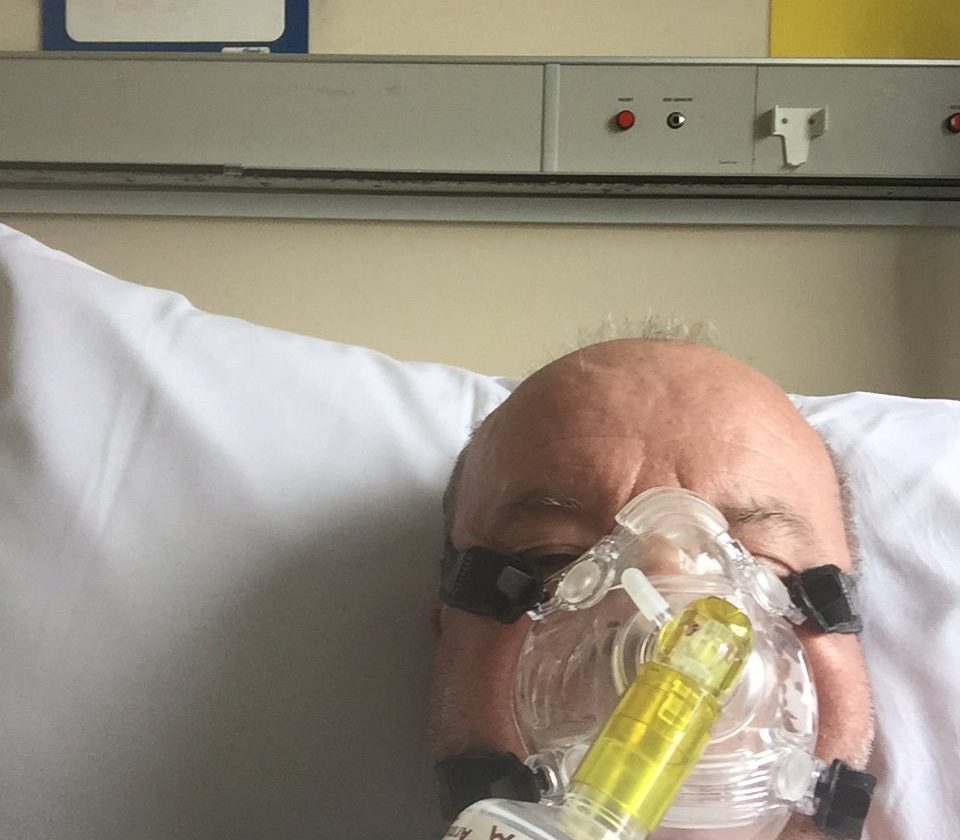 By this point, Nigel’s partner Rob, 64, was in intensive care.

Nigel said: “It was a strange time, knowing we were both in the same hospital but couldn’t communicate as I wasn’t allowed to leave my room and he was obviously in intensive care.

“Nobody could enter my room unless they were coming to administer treatment, which was unnerving, but there was a CCTV camera on my bedside locker where they could monitor my movements.

“That’s when it hit home, and I felt very alone. I just lay there and reflected on a lot of things.”

Eventually Nigel began to respond to treatment, and after 12 days in hospital, was allowed to return home to Blaenavon.

“I was so thrilled to be discharged, but I had no idea of what lay ahead of me and how difficult it would be,” he said.

“Being at home threw up all sorts new challenges. If I walked the length of my garden path, I’d be totally exhausted for the rest of the day.

“I basically lived between the bed, sofa and bathroom. Fortunately Rob, who had now also been discharged, was in better shape than I and was able to do the cooking.”

Nigel, who was a Senior Nurse Advisor for NHS Direct Wales before his appointment as Quality Improvement Manager, was working from home when he first developed symptoms.

Partner Rob, a design engineer, had been working from his office in Cwmbran.

Nigel said: “We were both very unlucky to have contracted the virus because we’d been following the guidelines by the book.

“Before this, besides high blood pressure, I was relatively fit and healthy, and so was Rob.

“It goes to show that anyone can catch coronavirus and anyone can spread it, which is why it’s so important that people follow the guidance in order to minimise that risk.

“Fortunately I lived to tell the tale, but I look back and think ‘How the hell did that happen? Why was I affected so badly?’

“We had a really narrow miss.”

Nigel and Rob now attend rehabilitation sessions organised by Aneurin Bevan University Health Board to improve their strength and fitness, and Nigel has now returned to work.

Jonathan Turnbull-Ross, the Welsh Ambulance Service’s Assistant Director of Quality Governance, and Nigel’s line manager, said: “Nigel contracting the virus is a real example that anyone can catch it or spread it.

“Nigel’s absence was greatly felt by our team, and his prolonged recovery demonstrates the impact that the virus can have.

“We’d like to extend a huge heartfelt thanks to our Aneurin Bevan University Health Board colleagues for looking after our friend and colleague through his illness.

“We’re thrilled that Nigel is back in work, doing what he does best, and we will continue to support him on his road to recovery.”

“Volunteers your communities need you now more than ever”, says Welsh Government minister

Have you seen Paul? Let police know via 101 (LINK)

Lockdown diaries🏴󠁧󠁢󠁷󠁬󠁳󠁿 Walk from home #2☀️☔️Wat’s Dyke with views of the Berwyn range and the plains of Shropshire 😍 Crossed a railway track, saw a rainbow & discovered a neglected footpath...managed to get through the bog with both boots still on my feet 😅🤣🌈🛤 @wrexham #Ruabon

@kirsty82230592 @wrexham It was the same at the Minera Lead Mines & Country Park - clearly people don’t know that there’s a lockdown on & they can’t drive anywhere to exercise, or they’re choosing to ignore the rules.